More than 3000 man and women attended the Muslim-Sikh-Hindu dialogue event “What if we do not even wake up now?” in Malerkotla in Panjab on 21. April 2018. Key talks were held by Muslim scholar Kamal Ali Khan, and Dharam Singh Nihang Singh, the founder of Sach Khoj Academy. Both speakers stressed the need to overcome frictions and to collaborate more closely in order to strengthen peace and justice. 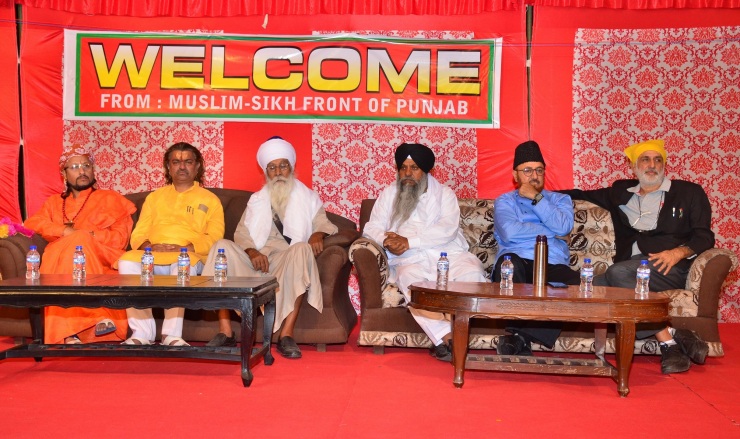 Following the motto of the UN 2030 Agenda “Leaving no one behind”, the Sach Khoj Academy joined hands with the organisers of the Muslim-Sikh Front and attended the interfaith event “What if we do not even wake up now?” (Agar Ab Vi Na Jage To?). The event brings together speakers from various religious backgrounds and aims at spreading a message of unity and harmony.

Muslim scholar and social activist Kamal Ali Khan quoted not only the Quran but also Gurbani in his emotional speech. He highlighted that the message of unity and peace is at the heart of religion. We may call the One and Only Allah, Wahe Guru, Ram or God. But we are referring to the same Almighty One who governs the Universe (Sahib Mera Eko Hai). Kamal Ali Khan further said that truthful Muslims are citizens who are loyal to the nation they live in. That is why Muslims love to live in India. At the same time Muslims wish to receive more love from their fellow citizens. He warned that those who raise slogans against Muslims, and create resentments against religious minorities, play a dangerous game since it creates divisions and hatred.

Dharam Singh Nihang Singh stressed that it is a sign of religious unawareness when we talk about “our community”, “our rights”, and “our religion”, since religion is all about creating Oneness and transforming the “I” into the “You”. He stated that egoism and ignorance has created communalism, nationalism and other forms of group-isms in the very name of religion and spoiled the actual mission of Oneness of all religious scriptures. Dharam Singh Nihang Singh made it a point that it is high time for all those who call themselves religious – Hindus, Muslims, Sikhs, Jews, Buddhists and Christians – to learn from past mistakes, renounce the destructive force of egoism (Savarath) and start walking on the path of altruism (Parmarath) and naturalness. Only then, the challenges we all are facing as humankind could be overcome.

Being truthful and overcoming falsehood, this is the religion of truth (Sach Dharam).

This site uses Akismet to reduce spam. Learn how your comment data is processed.

Read testimonials of how people benefited from the Sach Khoj Academy.

The Sach Khoj Academy – the Academy for Discovering the Truth – was founded by Dharam Singh Nihang Singh in Panjab, India. The non-profit Academy uses timeless spiritual wisdom (Gurmat) of 37 enlightened ones, which is at the heart of the Sikh Religion, to raise awareness about religion’s responsibility for strengthening unity, peace, human rights, justice and environmental protection. The Academy conducts holistic, critical exegesis, and addresses in depth the nature of spirituality, religion and evolution, as well as existential issues, such as what is good development and how the global challenges of humankind including terror, corruption, environmental destruction, and depression can be overcome. The Academy focuses on creating awareness beyond man-made religious and national boundaries, and brings together people from all backgrounds. Following the traditional way, the Academy passes on spiritual wisdom – preserved in the original writings of the enlightened ones (Gurbani) – free of charge, and mainly through the internet and social media.

The Sikh Religion (Sikhi, Sikhism) took on the shape of a unique religion during the 14th and 16th century in northern India. Today, around 25 million people regard themselves as Sikhs, students of truth. The religion is based on timeless, spiritual wisdom (Gurmat) that was revealed to 36 enlightened ones and preserved in written poetry known as Gurbani. It provides inspiration for spreading unity among people and leading a spiritual, virtuous and modest life in harmony with nature and the Divine Will of the form- and nameless Creator. Gurmat shows how humans can move beyond beliefs and intellectuality through self-realisation of their divine spiritual self.

In line with Gurmat, the Sach Khoj Academy does not earn any money in the name of religion. However, WordPress.com may display advertisements. The ads are determined by location, browsing histories, and other factors. We do not endorse the content of any ad. Ads are not selected by site owners, but rather generated by the WordPress.com advertising software. For details see: https://en.support.wordpress.com/no-ads/